Your cart is currently empty

As we come upon the Tulsa Race Massacre Centennial (the 100 year anniversary of the burning of Tulsa's Black Wall Street and Greenwood District by a violent white mob), we want to commemorate Black Wall Street's legacy by highlighting one of our favorite local artists. JaMario Beard's beautiful visual work is a celebration of Black American history and Greenwood. We are privileged to carry JaMario Beard's amazing Black Wall Street t-shirt collection at Ida Red and want to give you a little glimpse into the artist's life and influences! Get ready to be blown away!

JaMario, originally from Tulsa, started drawing at the young age of three and hasn't stopped since. After taking an advertising design class in high school, which inspired him to pursue art professionally, he graduated with his Associates in Graphic Design from Oklahoma State University. With an artistic focus on commercial art, he is influenced by graffiti, hip hop, rap, and urban culture as well as art deco, impressionism, cubism, and ancient Egyptian art. His renderings, which range from the colorful and abstract to the hyper-realistic, celebrate what it means to be Black in America and in Tulsa. 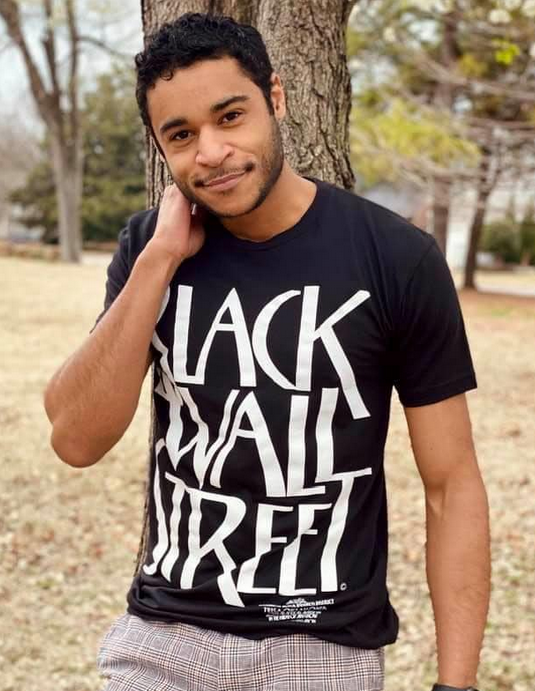 "I was once told that if something angers you or grieves your spirit, then you have found your cause," he has said. His cause is to "empower others by imparting a message and themes of knowledge, wisdom, and truth into their minds through art. Art is a universal language. A picture says a thousand words and every observer interprets something different. My people perish from a lack of knowledge ."

We are so honored to carry JaMario's beautiful Black Wall Street tshirt, which explains the greatness that was and is Black Wall Street. It reads "Black Wall Street down on Greenwood. Historical Black Business District, Tulsa, Oklahoma. Where an African American business community thrived in the midst of Jim Crow Laws and Segregation." It's a gorgeous example of JaMario's work and his love of his community. "When I designed the shirt ," he has said, "I wanted to promote the legacy and the royalty and the regalness of what Black Wall Street was, not the riots and the bad and the negative." You can find it at both locations and online!